Featured Exhibit: Jackie, How Could You? As seen on FOX television. 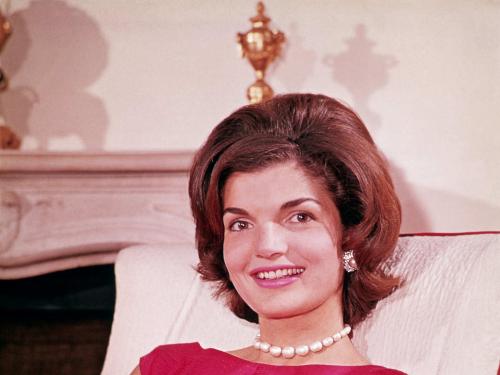 "Jackie - How Could You?" appeared as a HEADLINE on the front cover of newspapers from Stockholm to London. In disbelief, many called for excommunication via the church due to marrying Aristotle Socrates Onassis, as a public sinner. Today, Jackie is still listed as a Public Sinner next to her name, in her church. Jackie also lost her US Secret Service protection under American law, when she remarried. 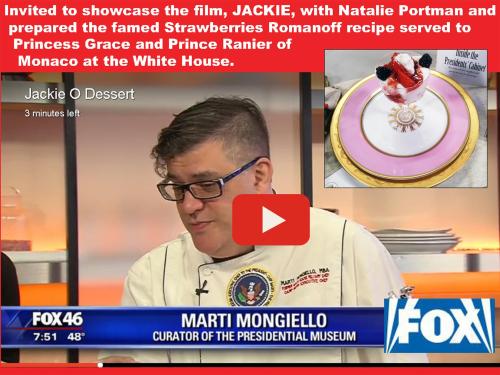 We decided to utilize the pink, President Buchanan china on the 2004 First Ladies Luncheon charger since Jackie loved pinks. We also utilized some of Executive Chef Stormy's French crystal for the Strawberries Romanoff.

This original recipe (Strawberries Romanoff) was created by White House Executive Chef, Rene Verdon, who served it at the luncheon for Princess Grace and Prince Ranier of Monaco, hosted by JFK and Jackie in 1961.

Click here to view the Jackie O Dessert Video! And watch Chef Marti on FOX Television preparing the Strawberries Romanoff that was served on May 24, 1961, to Princess Grace and Prince Ranier. And on this page is the recipe to print out.

People have often asked our Senior Curator, Marti Mongiello, about being a Butler, Valet, Aide, and Estate Manager to the White House Military Office (WHMO). They already know that he is a great Executive Chef and Bartender.

What they never ask him about is what it is like to be a Curator of a museum? In this regard, the 2017 exhibit for Jackie and the new movie has been a lot of fun, disheartening at times (to find out the truth) and insightful about women in 2016. Our newest exhibit opened on December 2 and showcases Jackie Bouvier Kennedy Onassis. The newspaper headlines across Europe were in bold lettering when she re-married, "Jackie, How Could You?" Discover not only Jackie's favorite dishes like Strawberries Romanoff but also her being listed as a Public Sinner and her later marriage to Aristotle Socrates Onassis.

A special thanks to our sponsors and helpers of Trackside Trader with Bobby Horne and Sharon Fraley Horne in Kings Mountain, DITTO Antiques of King's Mountain, The Presidential Service Center in Grover, Grover Antiques with Ann Hoyle and team, items from The White House Historical Association, Andrew Martin Drew King Museum Consulting Marketing Partners of New York, Sindo Mayor of Premier Barter, Joan Vitale, the Zwillinger family in honor of Goldie Zwillinger, Mother of AMM2 Harold Zwillinger killed in combat onboard USS Randolph, the uncle of Martin Harold Vitale (husband to Joan Vitale who donated the original gold star flag on display from WWII). The parents, Mr. and Mrs. Abraham Zwillinger, 50 E. 21st., Brooklyn, NY originally held the flag. See the flag behind the GI Joe doll of JFK in his WWII uniform.

"Jackie, How Could You?" Features the taboo museum topics of public and church outcry against her upon announcing the marriage to Aristotle Socrates Onassis of the Greek Orthodox Church and that relation to Dolly Payne Todd Madison being removed from her church for marrying again, the delegate James, from another religion. Additional items showcased in the new exhibit include her hallmarks on fashion - including with Oleg Cassini via a licensed white dress she wore on the India State visit, food favorites and family recipes of Beef Stroganoff, Poulet a l' Estragon, Boula Boula, Souffle Froid au Chocolat, Strawberries Romanoff prepared LIVE on FOX television in Charlotte, menus from private dinners given inside the White House including Quenelles of Sole au Gratin, Roast Sirloin Vert-Pre, Peas a la Francaise, Potatoes Gaufrettes, Galantine of Chicken, Bombe Glacee Fellab and Petits-fours sec, as well as disproving she was just a sweet, simple, somewhat kept girl.

The exhibit highlights Jackie as an educated lady who was working for Viking and Doubleday Publishing, editing several famed books (featured on site including three Nobel Prize winners by Naguib Mahfouz) and as a figurehead for rights of numerous social causes. The items on display include beautiful and stunning china directly from the White House Historical Association, china via Mottahedeh made in Portugal and used in US Embassies, a replica coconut written on by President Kennedy when he was stranded from the PT 109 having sunken, an original Gold Star Flag from WWII, the gold clock authorized by the Metropolitan Transit Authority (MTA) to be replicated from the Grand Central Station which she helped save in New York, a 1970's electric Royal Typewriter, a 1960's pillbox hat, the menu served to Princess Grace and Prince Ranier by Jackie and JFK, and the first ever US Presidential Daily Briefing (PDB) with a green pickle on top of it for the Central Intelligence Agency (CIA) having just recently been declassified (the PICL from the Pickle Factory) in 2016 (55 years later and called the President's Intelligence Check List (PICL). This is an exhibit not to be missed. 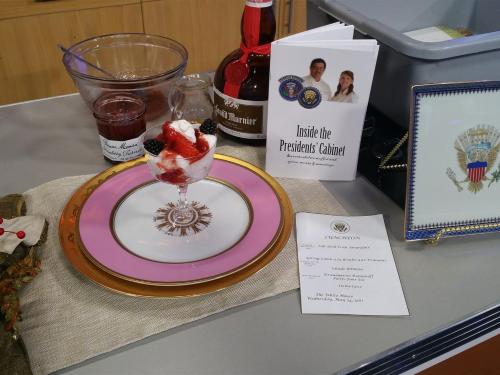 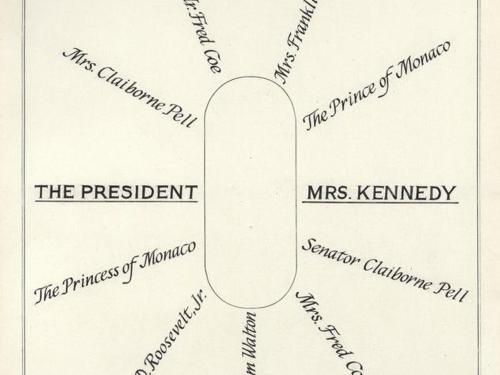 The seating chart for the historic luncheon.  Courtesy the John F. Kennedy Presidential Library and Museum, National Archives and The White House. 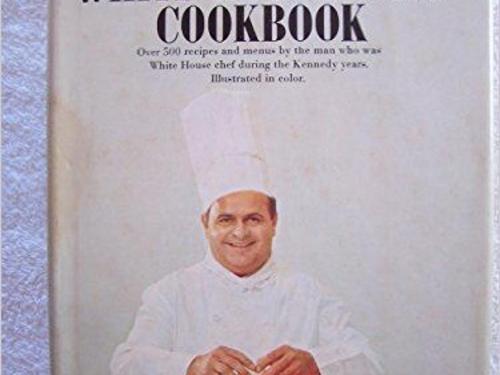 Of particular study and note is that White House Chef Rene Verdon published his cookbook, The White House Chef Cookbook, in 1967 and did NOT include the Strawberries Romanoff recipe. Instead he used a different name. He included his version of the way to make this recipe off of a twist to it by French Chef Auguste Escoffier at the Carlton Hotel in London (you may know Escoffier from creating the "Brigade" system of chefs in kitchens. It's a system first-ever used by White House Military Executive Chef Martin CJ Mongiello at the Camp David Resort and Conference Center).

Escoffier's (born in 1846) version was named, "Strawberries Americaine Style" - strawberries in orange liqueur, blended into whipped cream and softened ice cream. Most often the liquers used are Curacao (the failed crop of Spanish oranges planted on the island of Curacao) for it's ruined and bitter taste with Grand Marnier or Cointreau.

According to Epicurious, the fake "Prince" Mike Romanoff "borrowed" the recipe and gave it a new moniker. Soon it was the hottest item on the West Coast. The L.A. Biltmore called it "Strawberries Biltmore." The Palace Hotel in San Francisco served it with anisette and maraschino." Michael Romanoff is quite a famous restaurateur and Hollywood actor and sometimes named as a fraud, sham, and liar. You may have heard that the recipe was supposedly named after the Romanoff line of czars in Russia? But actually, the oldest claim is that Chef Marie-Antoine Careme (1784-1833), who cooked, and made this dessert, for the Russian Tsar Nicholas invented it and only used whipped cream. Analysis via English and French of Careme's and Escoffier's cookbooks does not show the recipe.

Needless to say, there are many authoritative sources quoting misinformation. There are many ways to make the recipe - found across the world, but generally, always includes strawberries marinated in alcoholic liquers and then served in a crystal parfait cup or coupe. Accompanying this is either softened ice cream, sour cream, creme fraiche, or whipped cream. A review of recipes across the earth shows several dozen variations on the theme. Rene invented a unique version which could be called Strawberries Romanoff or Strawberries Verdon, as he used whipped cream and whipped meringue with the marinated strawberries in his book on page 243. Look for his Fraises au Grand Marnier recipe, and you'll realize that this is his spin on Strawberries Romanoff. He also adds in Kirschwasser (cherry water) instead of Curacao. Research shows that it might be unlikely that the use of ice cream instead of whipped cream first occurred, not as Rene claimed he did in another friends book, but actually with Escoffier. It could be he did not know as the computer and Google were not available as they are today! The friend's book is an excellent read and fully covers the entire Princess Grace luncheon as, "In the Kennedy Style," by Letitia Baldrige. Letitia spoke excellent French, just like Jackie and Rene (who once told the press that he was so thankful as he lived inside the White House and at the time did not speak English so well).

It was not until 31 years later that Letitia published her newest book (she's very famous for all of her books especially on manners and protocol) in 1998 where Chef Rene claimed to have invented his version of Strawberries Romanoff with ice cream. He actually was using the Escoffier technique of blending ice cream with whipped cream for that specific luncheon with Princess Grace (see letitia's book on page 47). However, he also states that the dessert is named after the Romanoff family - thus locking that down and debunking any previous articles wherein the dessert is named after Michael Romanoff. It's not. Whichever way you decide to make the recipe, you'll be sure to enjoy it! Who doesn't like strawberries drunk on expensive liquers? 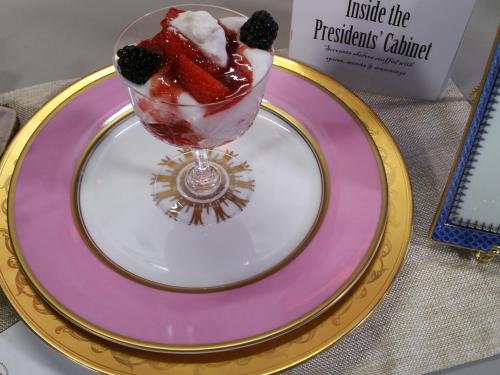 And be sure to read what was discussed at the luncheon! The behind the scenes, dialogue, letters, and requests are very, very interesting. Just like our exhibits, which are not featured here - this digital side of the display adds to the whole story. One of the funniest items to come out of the luncheon was how annoyed JFK was afterward and pulled Letitia aside to kindly reprimand her for calling Prince Ranier, "Prince Reindeer," during so many pre-meetings. "I had heard that so many times during the planning meetings that I slipped today and called him Prince Reindeer, TO HIS FACE, by accident!!!" "You've got to stop doing this." Prince Ranier had a light schedule that intensified afterward over how important his issues were to him and Monaco. Please see the letters below. The US official foundation portion of NARA, the JFK Library and Museum site for Jackie is here, her White House page is here, and do please see Jackie's dear friend, Grace Kelly's website here - The Princess Grace Foundation.

Read the behind the scenes requests from the luncheon... 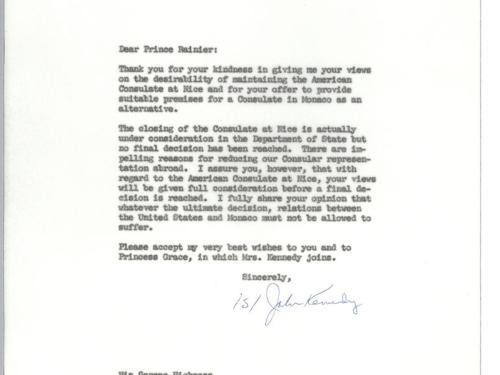 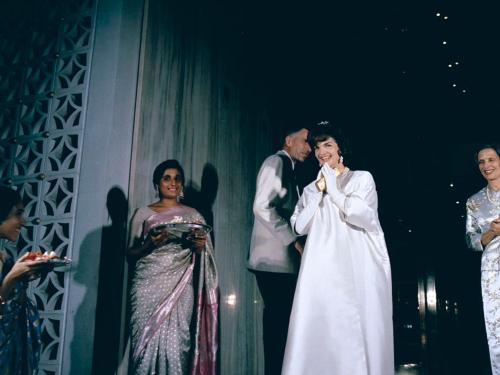 See the new CNN series here, American Dynasties: The Kennedy's. And when CNN International filmed here - they did so in English and Spanish versions Watch below).
Previous
Next