Try a Few Free Recipes from the Presidential Culinary Museum! 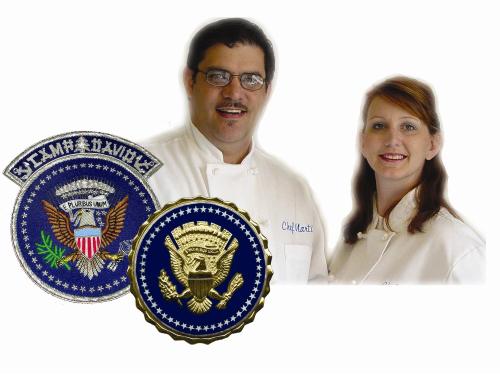 Try a few of Chef Marti's and Stormy's complementary recipes from around the world. You don't have to be a White House chef to whip up some fun food! You may want to read the recipe and then watch them make it on TV.  After reading and seeing how it's done, you'll be, "prepped like a pro!" like 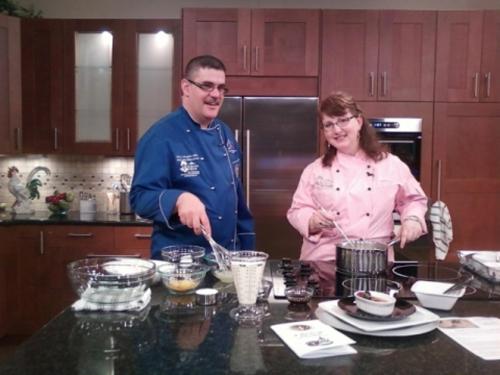 1. Mary Todd Lincoln's favorite Charlotte Russe (as seen on CBS and NBC TV gimme' the recipe now!), enjoying fresh Strawberries from Driscoll's - "Only the finest berries."  And Strawberry Shortcake Day is coming up! Watch the CBS episode here (links to Facebook video - will play, membership to FB not required).

2. The famed Obama Chi-Dog we were asked to prepare for the second inauguration day of President and First Lady Obama on CBS television (see it on TV) or (gimme' the recipe now!),

5. President Jefferson's Beef Vol-au-Vent in Paris (see it on TV in an upcoming episode) or (gimme' the recipe now!).

6. From many of our Clinton family shows on television and stage across three continents, we have featured Chef Marti's recipes invented from Bill and Hillary's favorite fruits, the Banana and Mango. When Marti created these they were a surprise for the first family! Although not everyone was completely excited at first - that's an intriguing story for later, because they loved them! Try Bill's Banana Vinaigrette and Hillary's Mango vinaigrette.  The Clinton's have greatly supported our veteran board and The US Presidential Culinary Museum. Moreover, see Hill's Mango Dressing on FOX here. Both of these recipes were shown on NIGHTLINE across several Southern states with Dove Broadcasting. If you had not had the chance to watch President Bill Clinton's salad dressing - this is the only time it has ever been shown on TV. Here, also, is the entire Nightline episode about good works, veterans issues, and more.

7. Since Chef's Marti and Stormy first started working with the Trump family they have been featured on FOX News preparing Don's favorite Trump Meatloaf Sandwich (watch on FOX), on stage doing the Trump family salad (download as a .pdf now) made famous by Ivanka and also have cooked in the Trump's lake for charity fund-raising! Trump's have greatly supported the US Presidential Culinary Museum. Enjoy watching the terrific Trump salad made on the Nightline TV show (about the 18:26 mark the Trump recipe comes - on so please fast forward if you like) here and often featured in the Trump Clubs!

See more of our shows including FDR and his Famed Fish Chowder, filmed around the world.

The famous Trump Salad featured at many of the Trump clubs and hotels worldwide. Created by Ivanka Trump. Photo by Marti Mongiello. 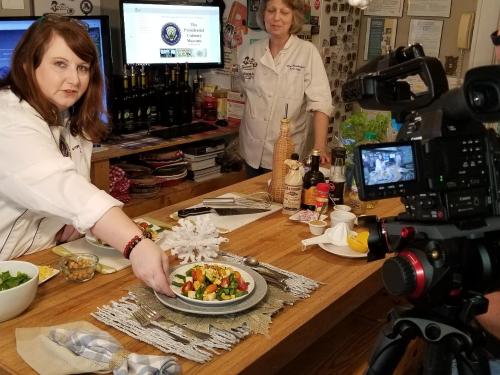 Chef Stormy is shown with Chef Kim filming for CBS Television with the Clinton and Trump episodes.
The famous Trump Salad featured at many of the Trump clubs and hotels worldwide. Created by Ivanka Trump. Photo by Marti Mongiello.
Mary Todd Lincoln's Charlotte Russe. Photo by Marti Mongiello.
Washington's Steak (and Kidney) Pie with Chef Marti's POWER CRUST
Previous
Next